The Los Angeles Angels play in the second largest television media market in the United States and feature a roster of outstanding players. 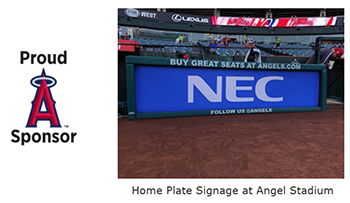 Under this agreement, NEC will have in-stadium signage behind home plate during games at Angel Stadium. Angel Stadium attracts more than 3 million spectators annually, which is amongst the highest attendance numbers in Major League Baseball. Through this initiative, NEC aims to increase the company's exposure among stadium audiences and television viewers throughout the United States, Japan, and other countries.

As a global technology integrator, NEC is focused on "Solutions for Society" that promote safety and security, such as biometrics and artificial intelligence. These solutions are now being used globally in a wide range of industries, including government, aviation, hospitality and sports and entertainment venues.

Through the conclusion of this sponsorship agreement, NEC will continue to strengthen the NEC Group's brand globally and contribute to the expansion of its business throughout the world.

About the Los Angeles Angels
The Los Angeles Angels joined Major League Baseball as an expansion team in 1961 and have since gone on to win nine American League Western Division Championships, host three All-Star games and capture the 2002 World Series Championship. Over its 59-year history, the franchise also boasts four MVP's, two Cy Young winners, three Rookie of the Year winners, 38 Rawlings Gold Glove winners and 156 All-Stars. Visit the Angels online at www.Angels.com, follow on Twitter and Instagram @Angels and like on Facebook at www.facebook.com/Angels. For media information, visit www.angelspressbox.com.

About NEC Corporation
NEC Corporation is a leader in the integration of IT and network technologies that benefit businesses and people around the world. The NEC Group globally provides "Solutions for Society" that promote the safety, security, efficiency and equality of society. Under the company's corporate message of "Orchestrating a brighter world," NEC aims to help solve a wide range of challenging issues and to create new social value for the changing world of tomorrow. For more information, visit NEC at www.nec.com.